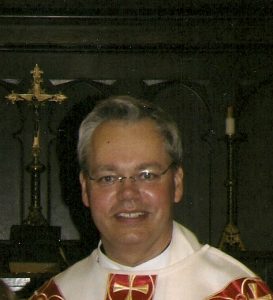 Pastor Raddatz attended Concordia Teachers College, River Forest, Illinois, from 1975 to 1979, earning his degree in Elementary Education.  He went on to Concordia Seminary, St. Louis, where he received his Master of Divinity Degree in May of 1983.  In 1984, he was called to be the Pastor of Redeemer Lutheran Church, Catawba, North Carolina, where he served until 1996.  During his tenure there, he received his STM degree from Concordia Seminary, St. Louis.
Pastor Raddatz was called to be our Pastor on January 7, 1996, and was installed on March 17, 1996.  Pastor and his wife, Angela, have six sons, three daughters-in-law, two grandsons, and four granddaughters!  We are blessed to have Pastor Raddatz and his family serving together with us in our Lord’s Kingdom Work.